I'm not sure if this toy drives my cat nuts or if he is enjoying pretending like he's on the hunt. I like to believe that it is the latter.

As soon as you turn this thing on, it makes a whirring noise and shoots a laser around in a slow rhythmic motion that intrigues my cat to no end.

He'll chase after it, jump up on it, pounce on it, try to scale the wall and jump at the ceiling for that little red dot.

I'm a little concerned that this type of game frustrates him because there isn't a way for him to feel rewarded. That is, he endlessly pounces at the red dot but never gains the satisfaction of catching his prey.

However, it's great for exercising him and making sure he stays physically active as an indoor cat.

Also be sure not to point the laser into the cat's eyes!

Hi! Welcome to my blog. I'm the owner of a cute, lovable ragdoll cat named Peter. I'm sure he'll make you laugh at some point, he's a pretty funny cat. Follow along on our adventures as I share our stories and some of the things I learn as a first time cat owner! 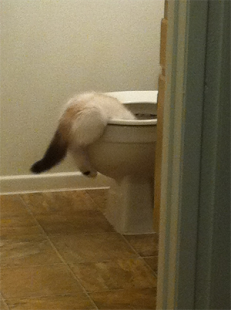